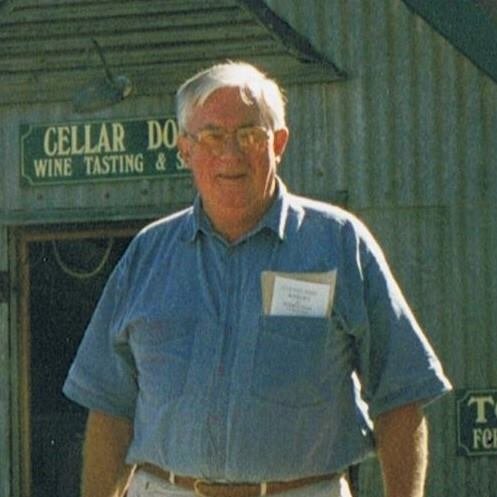 With the passing of Bill in the early hours of 1 January 2017 the rowing community in Western Australia has lost one of
the Legends of the sport. Bill was a driving force in Rowing WA for more than sixty years and no words can convey the
magnitude of his contribution during that time. He was a friend, mentor and inspiration for many generations of rowers
and more particularly officials of rowing at both a State and Australian level.

We extend our condolences to Ailsa, James, Diana, Helen and Elizabeth and their Families at this time.

A rowers dozen……..home and dry Bill you Beauty!

Much of what is taken for granted today in rowing in Western Australia was created or changed by successive rowing
administrations in which Bill Cooper had a significant influence:

Bill commenced his association with rowing as a member of the Collie River Rowing Club and later as an Undergraduate
at the University of WA which he represented as a member of the 1950 Intervarsity Eight. In the same year Bill was
elected Secretary of UWABC and so began over 60 years’ involvement in the administration of Rowing/Regattas in
Western Australia.

Bill maintained a close association with regional Clubs, particularly Collie River RC (until its demise) and Bunbury RC of
whom he was a strong supporter.

As a teacher on staff, Bill coached rowing at Governor Stirling High School and students from Scarborough Senior High
School in the mid-1950s.

Bill and new acquaintance Berry Durston became the delegates of UWABC to the ARAWA Committee in 1960. Soon
after, at the behest of the then UWABC Captain Bill Burbidge, Bill assumed the role as coach of the UWABC Maiden 8 for
a number of seasons.

Burbidge, Cooper and Durston developed deep and enduring friendships from their early years together at UWABC and
became a formidable and effective team as administrators of rowing in the State.

By 1964 Bill had become involved as an Umpire of local regattas and the controversy that followed most regattas which
were conducted by Umpires appointed by the host club, many of whom had no qualification apart from their affiliation
with the host club in whose favour many dubious decisions fell.

In 1964 ARAWA established a Regatta Control Committee, to which Bill was appointed, charged with the responsibility
for recruiting, testing and appointing Boat Race Officials. The Control Committee was instrumental in ARAWA adopting
uniform rules of racing promulgated by the Australian Amateur Rowing Council (AARC) in 1965. For the first time the
conduct of regattas fell under the control of the Association and the standards of Umpiring began to improve, although
it took a decade or more for the controversies to disappear completely.

Bill Burbidge, who joined the Regatta Control Committee in 1965, describes the conduct of regattas before 1964 as
“shambolic” and in need of a uniform approach to management. One of the first changes made was that all races were
started on time – no waiting for late comers.

Bill’s involvement with Umpiring and Regatta management continued until his retirement as Registrar in 2012 apart
from the period of his Presidency.

Bill held State, Australian and FISA (World Rowing) umpiring licences. Bill was a very regular official at most/all Club and
School regattas in Western Australia and almost all Kings Cup and National Championships (later Australian Rowing
Championships) Regattas. He mentored younger Boat Race Officials and was proud that a number of them qualified for
Australian and FISA Licences and have distinguished them in the role.

As a staff member at Western Australian Institute of Technology (WAIT), Bill with Berry Durston and Con Stacey, who
were also on the WAIT payroll, in 1969 were formed into a Committee to determine the feasibility of establishing a
Rowing Club on the WAIT Campus. Curtin University Boat Club is today evidence of that committee’s recommendation.

A windfall, one-off $60,000 grant from Department of Sport and Recreation in the mid-1970s was quarantined by the
ARAWA Executive Committee of the day (which included Bill Cooper) for the exclusive use of rowing related equipment
purchases. Today that fund has grown to over $168000 and continues to offer security – free loans to Rowing WA
Member Clubs to assist with the purchase of racing equipment. The foresight of the responsible group has created a
valuable resource for RWA Member Clubs today.

The seamless merger of ARAWA and Western Australian Women’s Rowing Council in 1981 was achieved through the
efforts of a working party comprised of representatives of both Associations, including Bill Cooper.

Bill led ARAWA between 1983 and 1990 as its President during which time the Association hosted two Australian
Rowing Championships on Wellington Dam, Collie. Much work was required to convince the WA State Government to
resource the development of facilities at the Dam. Bill’s connections with Collie and its local member in State Parliament
were valuable.

In 1984 the Western Australian Institute of Sport was established and included rowing as one of its inaugural
programmes. Bill was instrumental in negotiating the basis of the relationship between WAIS and ARAWA for the
benefit of the sport.

Bill was Western Australia’s delegate to the Council of Rowing Australia from 1983 to 1990.

At this time in the Association’s history, there were no paid employees of ARAWA and everything that had been and
was achieved was made possible by the voluntary efforts of elected officers.

With Presidential duties completed Bill returned to his favoured regatta conduct and management roles as a member of
the Umpires Panel from 1992 until 1998 and as Registrar from 1999 until the end of the 2012 regatta season when
medical issues forced him to retire.

Persuaded by his long-time friend and colleague, Berry Durston, in 2005/6 Bill undertook the not insignificant task or
researching writing and editing “Home and Dry” a story that begins with the first recorded rowing race in Western
Australia through to the emergence of women’s rowing and its rapid progression towards equal status in both
competition and administration. The work is an invaluable lasting legacy to the sport in Western Australia.

Bill was recognised for his contribution by the Rowing Community in WA by granting life membership of RWA in 1983.
The Australian Community recognised Bill’s service to rowing by awarding him a Medal in the Order of Australia (OAM)
in 2003.

Bill’s contribution to and achievements in rowing would not have been possible without the support of Ailsa and Bill’s
family for which we are all greatly appreciative.